OLia Lialina and Control in games

Olia Lialina is an artist net.artist.
It should be noted that this artist's asthetic is very much based around the early 90s internet. She used hypertext thoughtout their work and in contempory recurations of her work - the notion of the old redertimes and grain is recreated. Lialina is most famous for the peice 'My Boyfriend Came Back from the War'. This consists of black and white images and gifs that tell the story eof a womens who boyfriend came back from the war. What is intresting is how this peice has been said to use cinmatic tools and techqiues with frames simular to that of film. e.g close uP. Lialina however does state that she refused to reasearch anything about filmmaking teachiques and rather wanted to create a 'language of the net'.
So, what is the langauge of the net - well from this peice it is about the multilinaer nature being about to broken u by webappges, its the rendering allowing for tention to be created and the grainest of the images.
Now what does this all achieve yo may ask? It achieves bleackness to her work. It just seems so hopeless. The words and peice come across a lot more harshly because of two tones nature
But you may be thinking stupid femoids - what does this have to do with narrative? Well one thiing I do love about this peice is that depsite the multilinear nature the ending is always the same. If that doesn't have stuff to say things about the lack of control*. This is my opinion what seprate this work from that of film the interactivity adds to the the tone of the actual peice. 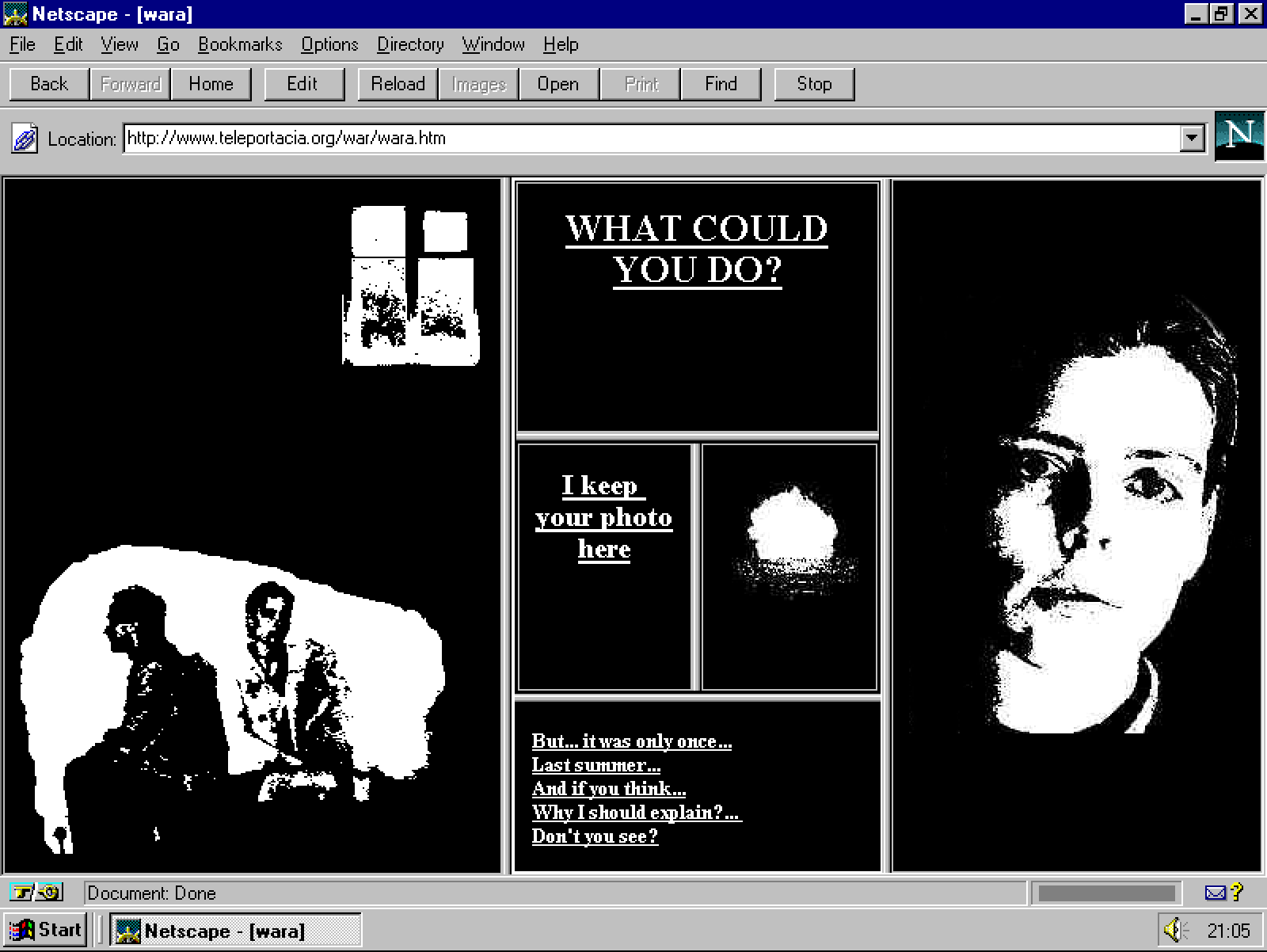 *I would want to make some notes about about choice in the gaming and interactive narrative community. There is knowledging in gaming that in games espcially your typical AAA game you are given commands you know what to do. Which is your bogstandard formular. This was played with in the orginal Bioshock in which [SPOILER] the plottwist is you being mind controlled by the phrase 'would you kindly' which would be at the start of all of your tasks in game. But, this idea of having choices in game really took off in the early 2010s in which the indie game community in games such as Undertale and later in AAA games like Detriot: Become Human. It should be noted some other games took this upon themselevs like the early Walking Dead games, but it was more this illusion of choice - which is simular to Olia Lialina. These games would pretend to hace this idea of 'every choice you made mattered' but in the end only your final two choices mattered to see what ending you got. They did this in the end because well, telltale had some devolpment issues to say the least but also corpations crushing creative spirts etc etc. I just think it's intresting this 'Illusion of Choice' was something present thoughtout gaming in my experince growing up. It was only later in these indie games in which the idea of the illusion of the choice added to the narrative (e.g. Undertale, Deltarune, Emily is Away) as it would add to this sense of it either being neverended (in cases where it looped) or adding to the sense that 'nothing really matterd'.